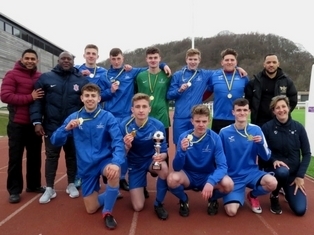 Boys and girls aged 15 to 17 travelled from across North East England for the KickOff@3 seven-a-side charity football tournament, which was held at the University’s Maiden Castle sports complex on Thursday 29 March.

The annual tournament is a joint initiative between the University and Durham Constabulary and is part of the national KickOff@3 scheme, which was launched by two Metropolitan Police officers to develop engagement and trust between young people and the police.

The Durham tournament was won by New College Durham, who will now represent North East England in the national finals this summer.

They will joined by runners-up Bishop Auckland College, and Durham Sixth Form Centre, who were awarded a place at the finals in recognition of their fair play.

“They all seemed to have a great time, and we wish all three teams all the best for the national finals.

“We are committed to engaging the local community and ensuring that our facilities are increasingly accessible to local residents. This is a perfect example of that commitment.”

Sergeant Shaz Sadiq, who initiated the Durham tournament, said: “This scheme is a great way for us to increase confidence and cohesion in communities across County Durham and Darlington.

“It was brilliant to see so many young people taking part today and raising money for a good cause.

“We hope they all had a fantastic time, and we wish all three teams the very best of luck for the national finals.”

The tournament raised money for the Bradley Lowery Foundation, to support Isla Caton, who is currently fighting Neuroblastoma.

It was opened by Mike Barton, Chief Constable of Durham Constabulary, and also featured stars of Channel 5’s Police Interceptors and Tricks, a London-based rapper who performed some of his songs to promote mental health awareness in young people.