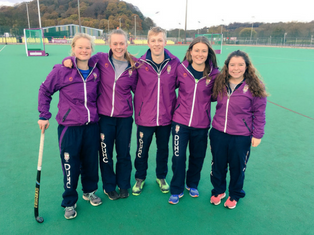 With the Hockey World Cup to be held in London later this year, over 200 children, aged six to 13, from twelve clubs as far as Carlisle and York, descended on the Graham Sports Centre to listen and learn from some of the University’s international players as well as two professional coaches.

The morning masterclass was followed by an afternoon competition in which the winners were awarded prizes, kindly donated by Mercian Hockey. One young player from Durham Dales Hockey club, which recently celebrated their first anniversary, said of the event: “Thank you so much for organising today. I’m having so much fun!”

Over 30 students volunteered their time to run the World Cup-themed hockey festival – the first in a series of events organised as part of Durham University’s ‘Hurray for Hockey’ community outreach programme.

The scheme, officially launched last term, aims to help encourage local people and children – of all abilities – to have a go at playing hockey and to use the fantastic facilities at the University’s Maiden Castle site.

Durham University’s Hockey Club Captain, Catriona McLellan, said: “The Winning World Cup Junior Festival was a fantastic day and I’d like to thank to all the parents, coaches, student volunteers, and participants for making it so enjoyable.

“For our first festival, we were delighted with how many local people got involved and we can’t wait to create an even better experience during May half-term at our next Junior Festival.”

Fancy trying your hand at hockey? Why not come along to one of the ‘Hurray for Hockey’ events? These include: