Karl is a Reader in the Chemistry Department at Durham University having joined the Department in 2004. Before arriving in Durham he was a Royal Society University Research Fellow in the Inorganic Chemistry Laboratory, University of Oxford and a Fellow of Lincoln College. He has been a Marie Curie Fellow at the Université de Strasbourg, France and the recipient of a number of awards including the Royal Society of Chemistry Laurie Vergnano Award and an award from the International Precious Metals Institute, USA. His work over the past few years has focused on nanoscience and nanotechnology particularly the chemistry of carbon nanotubes (CNTs) and the electrical properties of CNT films. More recently he has extended this work to include the synthesis and chemistry of graphene, the newest member of the nanocarbon family. He is the co-founder, and currently Secretary, of the Royal Society of Chemistry Chemical Nanosciences and Nanotechnology Subject Group. He established Durham Graphene Science, a university spinout company, in 2010 and was awarded the Royal Society of Chemistry Entrepreneur of the Year Award in 2011. 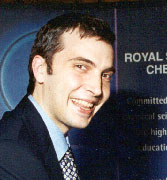 Ben Davis got his B.A. (1993) and D.Phil. (1996) from the University of Oxford. During this time he learned the beauty of carbohydrate chemistry under the supervision of Professor George Fleet. He then spent 2 years as a postdoctoral fellow in the laboratory of Professor Bryan Jones at the University of Toronto, exploring protein chemistry and biocatalysis.

In 1998 he returned to the U.K. to take up a lectureship at the University of Durham. In the autumn of 2001 he moved to the Dyson Perrins Laboratory, University of Oxford and received a fellowship at Pembroke College, Oxford.

Synthetic Biology's development at the start of this century may be compared with Synthetic Organic Chemistry's expansion at the start of the last; after decades of isolation, identification, analysis and functional confirmation the future logical and free-ranging redesign of bio-macromolecules offers tantalizing opportunities.

This lecture will cover emerging areas in chemical construction of biomolecules with an emphasis on new bond-forming processes compatible with biology and how they might be used.

(i) New methods are required: despite 80-years-worth of non-specific, chemical modification of proteins, precise methods in protein chemistry remain rare. The development of efficient, complete, chemo- and regio-selective methods, applied in benign aqueous systems to redesign the structure and function of proteins will be presented.

Durham Lecture Title: How RNA acts as an enzyme

Proteins are perfectly suited to be the chemical engines of living cells, accelerating metabolic reactions in some cases by factors of 1018 or more. They are polymers that are based on an electrically neutral backbone, and have an array of 20 different side chains that cover a range of aqueous chemistry. Contrast that to nucleic acids, with a polyanionic backbone and four rather similar nucleobases. Yet despite these limitations, RNA can act as an enzyme; these species are termed ribozymes. They can generate a million-fold rate enhancement of some reactions, and it is a challenge to the biological chemist to explain the origins of this catalysis. This problem may be of fundamental significance in the origins of life on the planet. Many feel that around 3.5 Gy ago proteins were insignificant, but instead RNA may have served both as informational and catalytic macromolecule. So how could RNA do this ?

We have studied a group of ribozymes that introduce site-specific cleavage and ligation of the RNA backbone, used to process replicated species and control gene expression in contemporary cells. To do this we use mechanistic enzymological analysis coupled with structural studies and single-molecule biophysics. We have shown that the basic mechanism is based on general acid-base catalysis, using adenine and guanine nucleobases. Interestingly, when we compare this with ribozymes that bring about RNA splicing it seems that they have evolved a different strategy, acting as metalloenzymes. Apparently RNA catalysts recapitulate many of the themes we see in the protein enzymes. And they may just be 3.5 Gy-old molecular fossils that sit inside us all !

Gavin Walker was a member of Castle at the University of Durham from 1988 until 1994. He graduated with Chemistry BSc (hons) in 1991 and stayed on to do a PhD under the supervision of Professors Ken Wade and Jas Pal Badyal investigating the synthesis and thermal decomposition of Zn/Cu mixed metal aromatic carboxylates (studying their suitability as catalyst precursors for methanol synthesis). Gavin continued his research into heterogeneous catalysts at Warwick University working for Rover on base metal car exhaust catalysts. He left Warwick in 1997 to take up a lectureship at the University of Nottingham where he has established a leading research group in hydrogen storage and became Deputy Director of the University of Nottingham's Energy Technologies Research Institute (ETRI). The ETRI has a £50 million portfolio of research which spans green coal, energy storage, smart grids and renewable energy generation. In recognition of his research he was awarded a Low Carbon Leadership award from Carbon Trust and EPSRC and in 2010 Gavin was appointed as the Sir Harry and Lady Djanogly Chair in Sustainable Energy. In addition to many publications in the area, he is also Editor of the text "Solid State Hydrogen Storage Materials - Chemistry and Materials".

Hydrogen is a versatile energy carrier, which can be generated from a number of sources, including renewable energy, fossil fuels and nuclear. As we move towards greater penetration of renewables for the world's energy needs, hydrogen will play a key role through this transition by providing a common energy carrier for a range of applications from portable electronics to vehicles and at the MW scale for grid energy storage. For most applications, compact storage of hydrogen is a key technical challenge and solid state storage of hydrogen is required to meet the medium to long term energy density targets of applications such as zero emission vehicles. Many of the systems with high hydrogen capacities suffer from poor thermodynamics for cycling and/or slow kinetics. Research at Nottingham has focussed on improving the kinetics and thermodynamics of high capacity light-metal hydrides and complex hydrides such as those based on magnesium and on borohydrides, respectively. This is being realised through the use of catalysts, modification of nanostructure and development of novel multicomponent systems. The destabilisation effect which results in these multicomponent systems has led to greatly enhanced kinetics at low temperatures and improved reversibility. An alternative to chemically binding the hydrogen, as in metal hydrides, is the use of nanoporous materials to physisorb the hydrogen. These systems benefit from very fast kinetics and good reversibility. Research has optimised the pore structure and we are investigating ways of improving the uptake characteristics.

Andy Whiting carried out PhD studies (1981-'84) at the University of Newcastle upon Tyne, working on b-lactam chemistry, followed by post-doctoral research (1984-'86) at Boston College, MA, USA, working on developing chiral Diels-Alder Lewis-acid catalysts. After industrial experience (1986-'88) with Ciba-Geigy, he joined the faculty in the Chemistry Department at UMIST as Lecturer, Senior Lecturer and Reader (1989-2001) before moving to a Readership at Durham (2001). He became Professor in 2009 and is currently the Director of the Centre for Sustainable Chemical Processes (CSCP) at Durham University having been instrumental in setting up the Durham University research centre in 2009. His research interests span the development of new synthetic methodology, asymmetric synthesis and catalysis, and has published over 120 papers, as well as several patents and numerous reviews. In this presentation, he will highlight some of the key areas of research ongoing in the CSCP to highlight the direction and future of synthetic chemical research at Durham University, covering diverse subjects such as chemistry for energy, new methods of molecular activation and approaches to lowering volatile organic compounds emissions from coatings.

His fields of research are high energy physics, especially the mechanism of hadron production, and also history of physics. His recent book 'Historia fizyki' (A History of Physics) has topped the list of bestsellers in Merlin.pl (the Polish equivalent of Amazon.com) and won the prize for the best scientific book 'Akademia 2007'. At present he is also president of the Scientific Council in the History of Science Institute (Polish Academy of Science).

His achievements have been appreciated not only by Polish scientists but also worldwide. Professor Wróblewski holds four honorary doctorates: from the Universities of Siegen (Germany - 1980), Chapman (USA - 1990), Glasgow (United Kingdom - 1992) and most recently from the Warsaw University of Technology (2011). He has given a series of talks in this centenary year of Marie Curie at Cracow, Katowice and Gliwice Universities.