I could ask for no greater honour. I hope it goes without saying that I will do my utmost to serve the University with credit.

Bill Bryson, on his installation as Chancellor 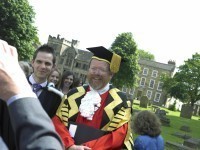 Bill Bryson was Durham University's 11th Chancellor, and formal head of the University, from April 2005 to 31st December 2011.

His commitment to engaging with all aspects of Durham life was a defining part of his Chancellorship.  Sam Roseveare, President of Durham Student's Union from 2009-2010 said: "Bill Bryson has been an inspiration and a true friend to Durham students. We will miss him greatly when he leaves.  As a staunch advocate of student volunteering and charity work, Bill has made a genuine and personal impact on the student experience and coupled with the eloquence of his addresses at Congregations, he has been the very archetype of a Chancellor.  There is a great deal of goodwill felt towards Bill - I was discussing his departure with a group of students and it was as if they had lost, if not a close family member, a close family friend!"

Bill stated, "I will treasure forever the time that I have spent at Durham University and in this beautiful city. It has been just the greatest privilege and honour I have had in my life to serve as Chancellor for such a remarkable community of students, staff and life-long University friends. I will miss Durham more than I can say and hope to find time to continue to visit after my time as Chancellor has come to an end."

On 3rd June 2011 Bill hosted an acting workshop for members of Durham Student Theatre (DST) led by Russell Crowe. This remarkable event came about after the Hollywood star contacted Bill on Twitter to arrange an event for aspiring student actors at Durham. Attracting international media attention, Bill described the masterclass as "a dream", adding "he [Russell Crowe] has found space in his life to do this, and not just to do it but to do it so well. It was an absolute inspiration to the students."

The US-born journalist and author, who has lived most of his adult life in England, is best known for his series of books observing life in North America, Britain, Europe and Australia. He sang the praises of the city of Durham in his account of touring around Britain, Notes from a Small Island (1995). He has written about the English language and about poverty in Africa, and won the 2004 Royal Society Aventis Prize for science writing with his encyclopaedic work A Short History of Nearly Everything. In 2004 he returned to Durham to receive an honorary Doctor of Civil Law.

In 2006, Bill  was awarded an honorary Order of the British Empire (OBE) and in 2009, was the first American to be made an honorary freeman of the City of Durham.

A high profile international figure, Bill is not only famous for his books; he is also actively involved in promoting cultural, environmental and scientific issues.  In 2002, he travelled to Kenya with CARE International, an independent humanitarian organisation working to end world poverty through sustainable development programmes. In 2003, Bill was appointed as a Commissioner for English Heritage, and in 2005 he launched a call to improve the protection of Britain’s ancient trees and woods alongside The Woodland Trust and the Ancient Tree Forum.  In 2007, he replaced Max Hastings as President of CPRE (Campaign to Protect Rural England).  For the last three years, he has been a member of the Campaign Board for the Royal Society's 350th Anniversary and edited Seeing Further, a book that tells the story of science and the Royal Society since 1660.   Additionally, he gave the Royal Society Anniversary Lecture at Gresham House in September 2010 and took part in a panel discussion on the Magic of Science in Durham in October 2010.

"I am struck by how expertly well you have a good time here. Durham students always seem to doing about a million things that have nothing to do with academic life and they are always doing them incredibly well. I cannot imagine there's any place in the world where fun is done more skilfully and well to a higher level than at Durham and often while you are having fun you do a lot of good."