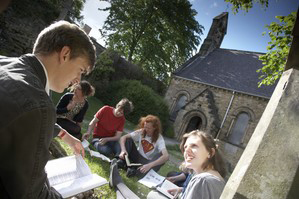 The Prince’s visit began at The Church of St Mary the Less, the chapel of St John’s College, Durham University. He inspected the memorial stone of Dame Elizabeth Bowes (1651-1736), who lived in Durham and is an ancestor of His Royal Highness through Queen Elizabeth The Queen Mother, his grandmother.

His Royal Highness unveiled a commemorative plaque in honour of Dame Elizabeth at Bowes House, her former family home, which is now part of St John’s College.

Founded in 1909, St John’s has always been progressive and inclusive in its outlook.

Prince Charles visited St John’s College at a time when it is at the forefront of the Church of England’s initiative to expand the numbers and range of people training for ordained ministry.

Cranmer Hall, which is part of St John’s College, has one of the youngest student bodies of any theological college in the country, with over half the new intake of trainee ministers under 30. This a key part of the Church of England’s national objective to see an increase in the number of people training for ministry of 50% by 2020.

Almost half of the latest intake of trainee ministers are women meaning that Cranmer Hall has one of the most diverse student bodies of any Church of England training institution.

Durham is also the home of the Church of England’s theological training programme. Common Awards is run by Durham University and validates academic courses run in theological colleges and courses across the UK.

Warden of Cranmer Hall, Revd Dr Philip Plyming, commented, “It was a privilege to welcome HRH The Prince of Wales to St John’s College. We enjoyed introducing him to some of the fantastic students who are studying to be priests in the Church of England.”

The college has continued to go from strength to strength and is now home to a family of roughly 500 undergraduates and 150 postgraduates, as well as 80 members of Cranmer Hall.

Dame Elizabeth Bowes (1651-1736) was born Elizabeth Blakiston at Gibside, near Gateshead, in 1651 and married William Bowes of Streatlam, five times MP for Durham.

The Bowes family’s success as innovators in coal mining pre-dated the Industrial Revolution and Dame Elizabeth managed the family’s property and coal interests after her husband died.

She lived at 4 South Bailey, now part of St John’s College, and is buried in the Bowes family vault at The Church of St Mary the Less. She had ten children and Queen Elizabeth The Queen Mother was descended from her third son, George Bowes.

“We are privileged that he took the time to honour the life and work of his ancestor Dame Elizabeth Bowes. His visit will be a proud day in the history of St John’s College.”