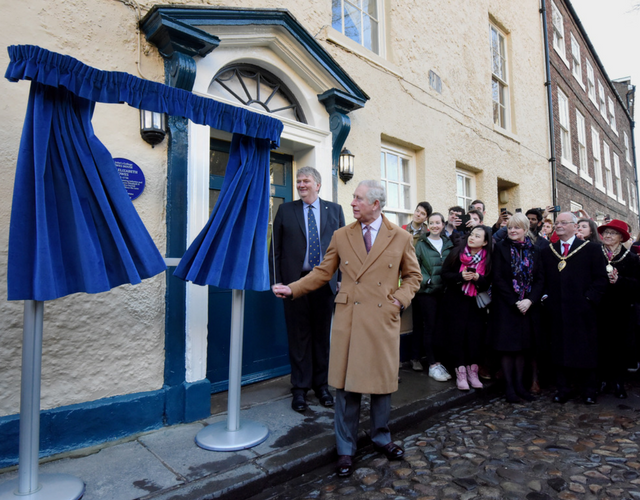 His Royal Highness The Prince of Wales has officially opened a new visitor experience, honoured a local ancestor and a local regiment and witnessed a 350-strong singalong of the popular hymn Jerusalem during a visit to Durham Cathedral and Durham University.

His Royal Highness then enjoyed a Durham Cathedral concert honouring Sir Hubert Parry, a 19th and 20th century English composer whose music he has long admired, which closed with a rousing rendition of Jerusalem, Sir Hubert’s most famous work.

His Royal Highness also met University staff and students, Cathedral staff, volunteers and choristers, local dignitaries and supporters of both organisations, as well as well-wishers who were among the large crowds which gathered to welcome him.

The Prince’s visit began at The Church of St Mary the Less, the chapel of St John’s College, Durham University.

After meeting ordinands from Cranmer Hall, the Prince inspected the memorial stone of Dame Elizabeth Bowes (1651-1736), who lived in Durham and is an ancestor of His Royal Highness through Queen Elizabeth The Queen Mother, his grandmother.

His Royal Highness was presented with a gift of a silver spoon from the Bowes family silver before meeting staff and students from St John’s College and unveiling a commemorative plaque in honour of Dame Elizabeth at Bowes House, her former family home, which is now part of St John’s College.

Professor Stuart Corbridge, Vice-Chancellor and Warden of Durham University, then escorted the Prince to the Gatehouse of Durham Cathedral.

Pupils from The Chorister School cheered and waved Union flags as His Royal Highness, escorted by The Very Reverend Andrew Tremlett, Dean of Durham, walked to the Deanery to view the Hallway Medieval Wall Paintings and meet representatives from the Cathedral and the University.

The Prince was then escorted to Open Treasure, where he viewed the Community Gallery showing casing the Cathedral’s learning programme with schools, Pilgrimage Gallery, the Great Kitchen – the new permanent home of the Treasures of St Cuthbert – some of the most significant surviving Anglo-Saxon artefacts, the Collections Gallery – viewing a new temporary exhibition about the Tudors, and the Monks’ Dormitory, before unveiling a plaque to officially open the exhibition experience.

He was presented with a gift of a full size replica of St Cuthbert’s Pectoral Cross and signed the Cathedral’s visitor book.

The next element of the visit was a major concert in Durham Cathedral, honouring the centenary of the death of Sir Hubert Parry (1848-1918).

The programme comprised I Was Glad, Blest Pair of Sirens and Jerusalemby Sir Hubert Parry and Songs of the Fleet by Sir Charles Villiers Stanford, for which Sir Thomas was the soloist. The concert was attended by 350 invited guests, who were all invited to join in the singing of Jerusalem at the close.

Afterwards, His Royal Highness met some of the performers, and Professor Jeremy Dibble, Professor of Music at Durham University and a world-leading authority on Sir Hubert Parry.

Professor Dibble assisted His Royal Highness on a BBC documentary presented by the Prince entitled The Prince and the Composer, which explored Sir Hubert’s life, and today he presented him with a commemorative gift of a bound volume containing works by Sir Hubert Parry.

Outside the Cathedral, the Prince greeted cheering crowds on Palace Green and was entertained by The County Durham Cadet Band and Bugles.

He then entered Durham University’s Palace Green Library, where he met representatives of the Durham Light Infantry (DLI) and toured the DLI Collection Gallery: Courage, Comrades and Community exhibition.

The exhibition tells the history of the regiment through the stories of the soldiers who made it, from its beginning in 1758 as John Lambton’s 68th Regiment of Foot. It includes the Victoria Cross awarded to Private Michael Heaviside for saving the life of an injured comrade during the First World War.

His Royal Highness signed the visitors’ book before being escorted to his car to depart Durham City.

The Very Reverend Andrew Tremlett, Dean of Durham, said: “We are thrilled that Prince Charles has visited Durham Cathedral and formally opened Open Treasure. He enjoyed visiting the exhibition and the Cathedral enormously and it has been an honour to host a visit from such a distinguished royal guest.”

Professor Stuart Corbridge, Vice-Chancellor and Warden of Durham University, said: “We were honoured to welcome Prince Charles to Durham University and delighted that he was able to meet a number of our staff and students. We are very proud of our students who performed in the Cathedral as part of the concert marking the centenary of the death of Sir Hubert Parry and the rousing rendition of Jerusalem is a memory that will remain with all of us for a long time to come.”

The Reverend Professor David Wilkinson, Principal of St John’s College, said: “It was a great pleasure to welcome Prince Charles to St John’s College and Cranmer Hall and we are deeply grateful that he took the time to honour the life and work of his ancestor Dame Elizabeth Bowes.

“Our staff and students enjoyed meeting and chatting with him greatly. His visit marks a proud day in the history of St John’s College.”

Hayley Lam, a Music student at Hatfield College, led the Durham University Symphony Orchestra in the concert and was also introduced to The Prince afterwards.

She said: “It was great. To play some of the most rousing and patriotic music there is to The Prince – it’s been a bit of a whirlwind. It was very exciting.”

Cathrine Ngangira, from Zimbabwe, is an ordinand at Cranmer Hall, training to become a Church of England vicar, and was introduced to The Prince afterwards.

She said: “It was a very special moment, having him walk into the chapel, be introduced to him and shake his hand.”

His Royal Highness received an Honorary Doctorate of Civil Law from Durham University in 1998. The Prince of Wales last visited County Durham in 2012 and Sunderland in 2015. 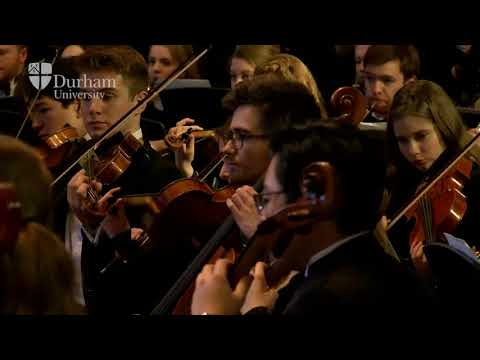 The visit of HRH The Prince of Wales to Durham, 15 February 2018

Staff and students of the University describe the Royal Visit, what happened, how it went, and what it felt like to perform a concert for a prince.

Music Durham is the umbrella society for Durham University’s main ensembles, coordinating the activities of the student-run and student led music socieites. Music Durham works closely with student singers and musicians to deliver some of the many concerts, shows and socials, while also providing the professional Masterclass Series for Music Durham members